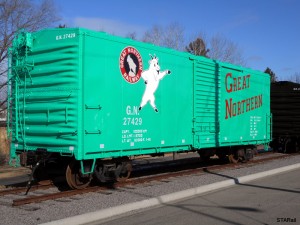 A Great Northern boxcar originally built in 1941 has been restored by the St Cloud Area Rail Legacy Museum (STARail). STARail purchased the BN 950661mw, which had been parked on a spur in Northtown in dowdy mineral red maintenance of way colors for many years.

The car was originally built as an external Z-braced wooden boxcar in 1941. It was rebuilt with steel sides at the Waite Park Car Shops in 1961 and painted in the dramatic Glacier Green livery of the day, with the iconic “Standing Rocky” cartoon complementing the traditional “goat in silhouette” in the GN seal which had been used for decades. The BN 950661mw car body was restored by Kimball Railcar Services in Kimball, Minnesota, where it was sandblasted, patched, primed, painted and lettered in vinyl. The car also received a clear anti-graffiti coating. It was moved on January 28, 2016 to Waite Park, where it joined the other two GN Car Shops-built cars on the STARail display track adjacent to the Shops, the red X-240 caboose (given to STARail in 2011 by the GNRHS) and the GN 2537 express boxcar (a video of the restoration and move of GN 2537 can be seen on YouTube).