The Society was founded by Charles F. Martin in 1973 under the name "The Fraternal Order of Empire Builders", and it was dedicated to the preservation of everything related to the Great Northern Railway.

In 1982 the Society name became "The Great Northern Railway Historical Society". With this name change the Society also became chartered under the not-for-profit laws of the State of Illinois, and acquired tax exempt status from the Federal government under the provisions of Section 501(c)(3) of the Internal Revenue Code.

Each quarterly issue of the GNRHS 'Goat' normally contains sixteen pages of general information and society affairs, new member lists, member sales and want items, and books/videos listings of subjects related to the GN and its pre/post merger corporate identities. Issues include 40 to 60 additional pages within separately stapled titles known as Reference Sheets. Each issue of the 'Goat' also contains a section of pages dedicated to GN modeling, the Modelers' Pages.

Materials published normally come from the private collections of our authors or general members, and from the various depositories or museums known to contain GN records. All materials loaned for use in our publications are returned to the sender, and appropriate credit is published. No payment can be offered for manuscripts, but reimbursement of photographic, reproduction or other copying expenses may be made for those items which have been approved in advance by the text or layout editors. 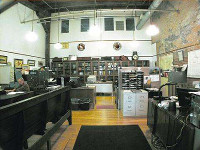 GNRHS and NPRHA jointly operate large archival facilities in St. Paul, MN and Burien, WA. The Joint Archives physically reside at Jackson Street Roundhouse in St. Paul, MN and the Pacific Northwest Railroad Archive in Burien, WA, and comprise hundreds of thousands of files, drawings, books, photos and physical artifacts. Indexes and scans of many of these materials are available at www.gn-npjointarchive.org. All serious researchers are welcome; preference is given to GNRHS and NPRHA members.

Through our Heritage Fund we help worthy Great Northern heritage projects. The fund is a member-donated fund established for the"preservation of Great Northern heritage and history". Based on official requests from organizations, funds are distributed at the GNRHS Board's discretion during our annual convention, usually in July.

The Convention is hosted in a city which received GN service and business. Conventions are held usually over a four-day period in July.

Quite unique for a Historical Society, the GNRHS owns Great Northern 400, the first 3600 horsepower, 20 cylinder production model SD45 diesel electric locomotive manufactured by General Motors Corporation (EMD). In 1986, then Burlington Northern 6430 was retired and donated to the Great Northern Railway Historical Society. In 1989, BN 6430 was repainted to its original GN 400 paint scheme at Grand Forks, ND. 'Hustle Muscle' as GN 400 is known as, is operational and sees occasional use at conventions and special events.

The Society offers, through its Company Store, many Great Northern related products. Apparel, books, CD/DVDs, 'Goat' back issues, model kits and more are all available at discounted prices for members.

We invite you to join us by completing a GNRHS Membership Application online or by completing this form and mailing it in. We have about 2400 members who hope you will join our ranks of Great Northern enthusiasts. Current dues rates are shown. Sustaining dues, at $20 per year, are purely an extra contribution you may wish to give to GNRHS, and nothing extra is received in return for this except the satisfaction of additional financial help to the GNRHS. You may pay dues and sustaining payments for any number of years into the future.

A membership year covers the months January to December, and includes all issues of the 'Goat', and any extra items published during that year.

We look forward to receiving your GNRHS Membership Application, and to your active participation as a member of GNRHS.