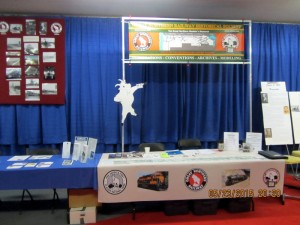 On Friday May 22nd the River City Modelers model railroad club set up their 8′ x 20′ portable layout at the Heritage Funeral Home at Riverside Cemetery. GNRHS Recruiters Jerry Barsness and John Langlot set up a GNRHS membership table in the same room as the layout. The Northwest Rail Museum also had a table to talk to people about railroads in the area. There were several displays from two groups in Hillyard that are working to preserve Great Northern history.

The Chapel had a picture of James J. Hill and a replica of his casket on display. A musical group put on two programs each day about Hill’s life. The layout and GNRHS table were manned from 9:00 AM until 5:00 PM all three days. Recruitment was very good signing up 15 new members and two renewals.  Out of the 15 new members five were GN veterans.

Total head count for the weekend according to the Heritage people was a little over 4000. Our recruiters were kept very busy all weekend talking to people about the GNRHS.