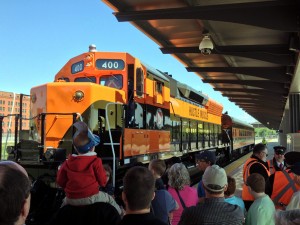 She was on display for the National Train Day festivities, together with Great Northern coach #1213 owned by the Minnesota Transportation Museum. Present also were BNSF Railway with GE ES44C4 #8143 and a train made up of cars from the Friends of 261, including former Milwaukee Road Super Dome #53.

About 4000 people enjoyed seeing and hearing about Hustle Muscle and had a great time touring the engine and cars.

Later that day ‘Hustle Muscle’ moved under its own power to Osceola, WI with #1213 in tow, where they will be used on the Osceola & St. Croix Valley Railway tourist train. Expect to see ‘Hustle Muscle’ in regular service starting in early July.