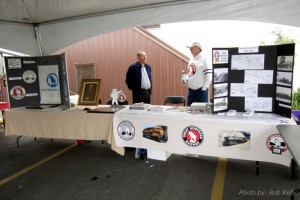 Scott Tanner and Andrew Klamka at the
GNHRS table at Interbay

This event was organised for the purpose of recognising current and former BNSF employees and their families with a day of fun. Many younger couples came out with their kids, while some older employees and retirees brought grandkids. This non-public event ran from 11 AM to 4 PM. Posing for photos in front of the beautiful GN painted caboose

This was a very nice event, and a lot of fun for the GNRHS to participate in. Several rails showed keen interest in the GN history and even the possibility of joining the society. A few of the older retirees are honest-to-goodness GN veterans, so they seemed to especially appreciate the effort to keep the GN spirit alive and on people’s minds.

The GNRHS was happy to be present at this event and would like to thank BNSF and especially Alisha Walker for the opportunity to be part of their celebration.

Check out Scott Tanners report for more info and photos.