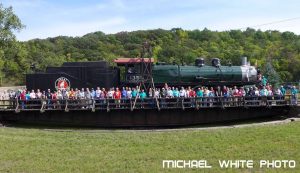 Our GNRHS convention of 2017 was held for the first time in South Dakota. Attendees were treated to rides behind a hot, coal-fired 0-6-0 Lima steam engine and a visit with the lovingly-restored Great Northern Railway 1355 H-5 class, 4-6-2 at Sioux City, Iowa. Those who arrived early for the convention also enjoyed a tour of the Midwest Railcar Repair facility.

Our modelers enjoyed an evening’s visit to three separate local layouts as well as the modeling contest during Rail Fair. Convention speakers presented a wide variety of topics. We experienced everything from Operations on Jeff Otto’s Missabe Northern model railroad, Mark Meyer talking about BNSF locomotive distribution, and several features on GN lines and their predecessors in South Dakota up to present-day local BNSF operations.

The convention closed on Wednesday evening with the banquet featuring a talk by Mark Gjevre of BNSF about the upcoming Sioux Falls yard relocation project. There was also a brief presentation about next year’s Bellingham convention which will include two tours up into Canada to view GN’s legacy. Afterwards, the raffle prizes were distributed and another successful GNRHS convention came to a close.

We hope to see you all next September in Bellingham on the route of the Amtrak Cascades!

At Midwest Railcar Repair GNRHS members inspect a tank car that's in for a new jacket.

Lindsay Korst enjoys the view from the cupola.

Model of stockyard on display at Rail Fair.

Just a few of the raffle prizes.

Quartzite mine on the Dakota Central.

Checking out the turntable at Sioux City.

Pulling GN 1355 onto the turntable.

Enjoying a speeder ride across the former Milwaukee complex.

Mark Gjevre of BNSF was our banquet speaker.